My first encounter with Mythical Woman 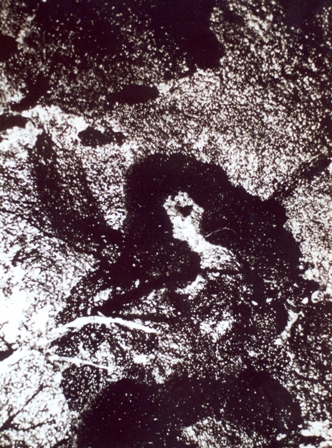 I first met Mythical Woman in 1984. It was in Southern Greenland. I was travelling with my beloved. We had come to the Southern Airport in Narsarsuaq. He was on his way on a plane back to Denmark – I was to stay.

Narsarsuaq is nothing but an airport in the middle of nowhere – at least it was so in 1984. The place was a dessert of asphalt and concrete, a desolate soul forgotten spot. The setting of our last three days together before we were going to be apart for some time. – The coming separation made me vulnerable and open the way that makes one susceptible.

One day with a clear sky we followed the asphalt road. As we walked, we were leaving the world of the airport – civilization, and at the same time coming closer and closer in contact with nature.

We had gone out for the nearby glacier. At the end of the asphalt road we found ourselves in a complete different world. Where the melting waters of the glacier was flowing over the area was a wonderful landscape of moist mossy lushness.

We had escaped the world of concrete and asphalt and found ourselves in the midst of something like Eden. The sun was radiating from a clear blue sky. Around in the area were tiny little lakes, just big enough for one salmon or a trout on its way.

In this land of the blessed we both started photographing. What else could one do. My attention was drawn to the many details in the moss. So many drawings showed itself in the lushness. – It was a wonderful day. And it could only become even better when the whole landscape was seen in contrast with the concrete and asphalt of the airport.

Walking around in the moist mossy area I saw pictures all over the place. I took quite many close ups that afternoon at the same time seeing and not seeing what I actually saw. All the time seeing a flow of colors.

Some years passed before I looked at my negatives from Greenland once again. I was especially drawn to one specific negative and enlarged it many times. A snap with some lush moss, some small twigs, raindrops and the sun playing into it.
Then one evening in august 1988 I sat down with a pile of black and white copies, a color palette in front of me – transparent watercolors – and did my first photo painting. I painted and looked, painted and looked – flowing with the colors ..… Then the picture was finished. Lay there in front of me.

I looked and looked at that picture. It was not possible to deny it, it looked like the face of a woman. Not a woman one would recognize, more like a silhouette of an entity. Someone you would here about as a mythical figure. The upper part of a woman whom you could imagine as a harp player.

Now it happened so that in the same period I discovered that there were times, I was in contact with the same openness, the same susceptibility I had felt in contact with Mother Earth in Greenland some years earlier. The atmosphere I related to the experience of Mythical Woman - the atmosphere of nature, the photographing and painting  -  that atmosphere I was given a special access to in specific days full of openings. I had actually discovered that as a woman I was given a pathway to that specific atmosphere. I had access to go into another world.
At the beginning these days didn’t have much space in my consciousness. Actually I didn’t really agree with the delicacy of the opening up. It was days with the same vulnerability I had felt in relation to parting from my beloved in Greenland – the mood that took me into the same defenceless opening up, becoming susceptible to something beyond the immediate. One of the first times it happened I put it down in a poem – Time of Blessing 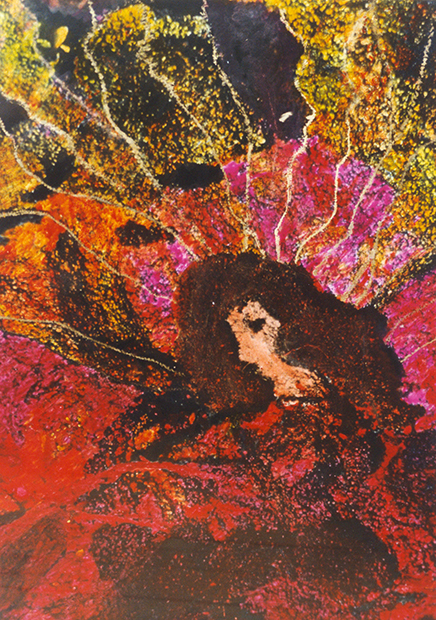 What a bliss it is
menstruating

The blood had shown me the way – the female blood.
Through the opening to the vulnerability of the blood I had been shown a pathway into a landscape I had never been aware of before. The same universe I had discovered in the moist mossy area with the melting waters from the glaciar.
In close relation to the generosity of the lushness of Mother Earth my soul had come alive for a brief moment. As I discovered the possibilities of the blood I began more and more determined to go into the delicacy of the first days of the blood. In this process the eggs, the cycles and the female blood have become sacralized.
Here pictures and poems have been conceived in a flow of inspiration. Moments in which it is possible to relate to the timeless spiritual dimension.
It all started the day I met Mythical Woman.