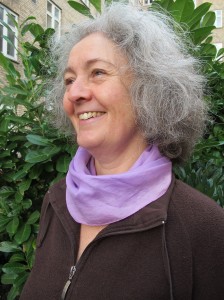 I co-work with the Danish Organisation of Psychotherapists
psykoterapeutforeningen.dk/
My Art Calender Kalender 2015
The text will soon be ready in English

Recently my article PTSD – in relation to Femininity and Spirituality was brought in
Periodical for Psychotherapi. – On the incredible power of menstruation and PMS - hidden in a condition of collective posttraumatic stress in relation to the feminine.
Tidsskr. f. Psykoterapi 3 2014

In 2011 I attended a workshop on Jungian analyst Marion Woodman’s work and came to know her books. This inspired me very much – and since then I’ve been trying to bring this inspiration on to other people.

I also work free lance with communication and have been director of documentaries. One on Preconceptual Care, with Danish nutrition advicer inspired by the British organization Foresight – and also a documentary on Guilt and Forgiveness, with personal interviews as well as interview with a theologer.

For 30 years I have been in a creative process developing a series of more than a hundred Pictures. Working with photography, silkpaintings and poems I have been circling around the feminine. Over the years my whole process has come to be focused on cycles and rhythm. I’ve tried to express my experiences with the female blood in poems and paintings, using the sensitivity of the first days of the blood. This whole story started back in 1984 in my first meeting with  Mythical Woman. Read the story of Mythical Woman here and more stories of my Pictures here