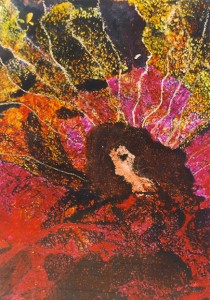 The moment I painted Mythical Woman She started whispering in my ears. Over the years I heard Her whispering on and on.

She whispered to me in the cycling energy of the feminine – through the eggs, the female blood and finally also through the periods of PMS.
Mythical Woman was the first picture of The Forgotten Feminine in my life – and was followed by a series of pictures of the feminine becoming more and more conscious in my mind.  Over the years more than a hundred pictures and many poems have come into existence.

Glimpses of The Feminine

The whispering of Mythical Woman has come as poems and words of guiding wisdom. In that way I have experienced the awakening of The Forgotten Feminine.

In a poem from the early 90th She comes closer and disappears like the waves meeting the cost. The poem is titled Oceanwoman. 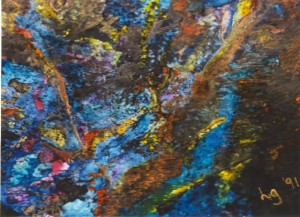 Though She has always been
and will always be
She has no age.

So I had a feeling of conscious contact with a feminine undercurrent though in a deep impersonal way. I had caught contact with the feminine on a deep mythical level far from my everyday consciousness. In a picture some years later titled No Name, “She” became a bit more human though still far from someone whom I could identify with. I tried to talk to her and actually had the feeling of being answered.

Who are you?
Nobody

What is your name?
No Name

Where do you come from?
From the One who is

Where are you going?
Everywhere
- and nowhere

But what do you want from me?
Everything
– everything or nothing
As you wish!

Ties of the Female Blood

Another work showing the sacralized feminine is again the womb. It has both the vibrating eggs of the ovaries and is surrounded by the doves – a symbol of the holy spirit which in ancient times – as presented by Joan Chamberlain Engelsman, was seen as synonymous to the feminine dimension of the divine. 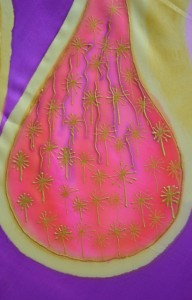 Detail with the Vibrating Eggs of the Ovarie 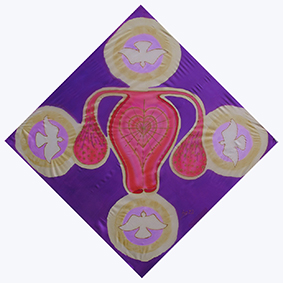 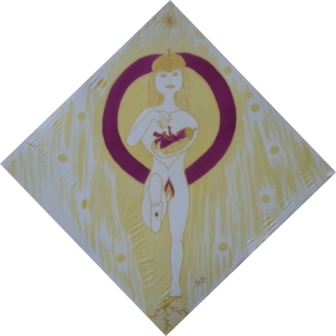 During my process I have become still more aware of the possibilities of menstruation, ovulation, pms and the cyclic principle. In the flow of eggs I have discovered the principle of rhythm. The starting point for this observation was a very deep experience of going into the energy of one egg. It happened by choice – I didn’t know anything at the time. I had had a deeply depressive dream which I worked hard on. It happened to be in the last week before a period and so included the days of PMS. I was in a position of complete hopelessness when I started doing drawings. One drawing after the other – and then suddenly I had a womb in front of me on the paper. Having absolutely no idea of where it came from I looked and looked at it. Then it was as if the womb said to me:
I want you to paint me. And so I did. 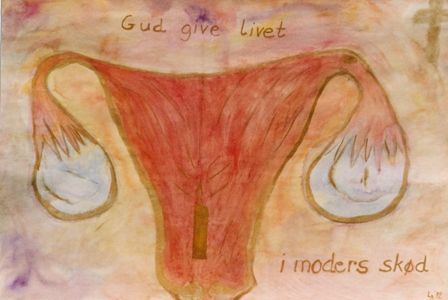 In the picture it is said: God gives life in Mother’s womb. 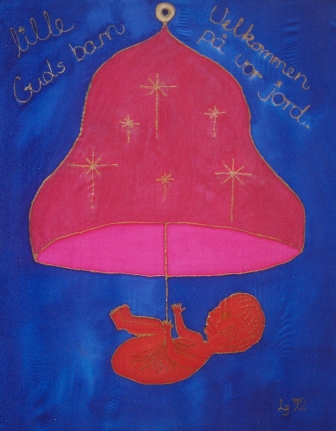 In the picture of the newborn hanging in the clapper it is said:
Little child of God Welcome to our Earth.

Over the years I have in my pictures seen different kinds of rhythms come forth. First the monthly rhythm with ovulation and menstruation. Over quite many years of working with the sensitivity of ovulation and menstruation every single egg has given me a lot of inspiration making it possible for me to conceive pictures and poems. – The individual cycles and the 9-month rhythm have been the two basic unities for my focus.

An example of a process over many years shows in two pictures a process of the dark and light side of the Self slowly approaching each other. In the first picture with the scissors the woman is going in circles. Having had a too strong focus on the light side of the Self in meditation and an idealistic concept of spirit I had not found sufficient supervision for metabolizing the dark side of the Self. Meditation had become my idealised demon lover. To have the light and the dark side come into a process of approaching each other it was necessary to work with the daimonic forces. In this process Jungian analysis and the jungian perspective proved to be of great help. 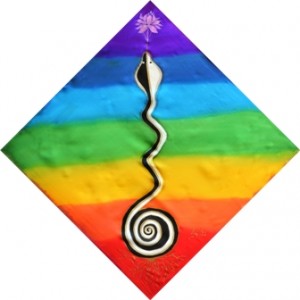 Now – after having been in this process for more than 20 years I have discovered a certain connection between the individual 9-month cycles. So a pattern has become visible – a pattern relating four 9-month-cycles to each other in quadrophonies. Then again these quadrophonies can be seen as relating to each other. It is a whole system flowing in the universe – the cyclic rhythm of the feminine, a pattern of a pathway to the feminine.  Here the keywords are going slow, circling, listening to the eggs in a spiral-pathway.

An example of connection between two pictures giving an example of a process over three years – the same as four 9-month cycles – is seen in my working with a mosaic.The first one came from working with healing fragmentation – the second one expresses the integration of spirit into this process of healing. 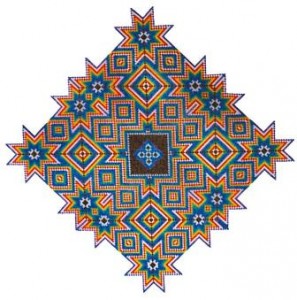 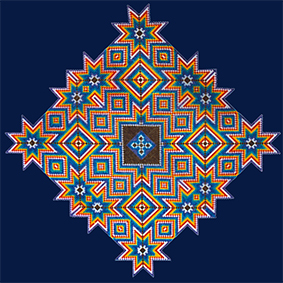 With the Backdrop of Spirit

When I look upon my work through the experience of the principle of rhythm I believe my pictures should not be seen as individual works but as one work creating a language for the feminine and the meeting between feminine and masculine – a language for integration of soul and spirit.

As mentioned my work includes more than a hundred pictures – mostly silkpaintings and works of photography – and also many poems.

It is so challenging to have true faith in the feminine in a world of strong patriarchal values. To discover and to hold on to the wisdom, beauty and sweetness of the feminine one has to be very conscious of the impact of patriarchal power on the feminine. I think my background in the field of female research has helped me a lot to keep focusing during so many years. Since I came to know about Marion Woodman’s books and work on the feminine I felt I had found the right framework for my own experiences. So I have tried to integrate the inspiration from Marion Woodman into my own Work.

I have compiled a presentation of my pictures and poems to communicate the experiences of being in the flow of the eggs. In the book I also give a presentation
of jungian theory on daimonic forces. The title of the book is:

The Feminine Undercurrent – on women, spirit and daimonic forces

The book is not yet obtainable in English, but you will find about 50 pictures
- and it is possible to ask for an English summary.

If you want to order the book please send an e-mail to
L_gadegaard@hotmail.com